Child of Simon de Dammartin Count of Aumale and Marie (?) Countess of Ponthieu

Child of Marie (?) Countess of Ponthieu and Simon de Dammartin Count of Aumale

Child of William II (Talvas) (?) Count of Ponthieu and Alice (Alix) of France (?) Countess of Vexin

Child of Alice (Alix) of France (?) Countess of Vexin and William II (Talvas) (?) Count of Ponthieu

Philip I King of France, Count of Paris1 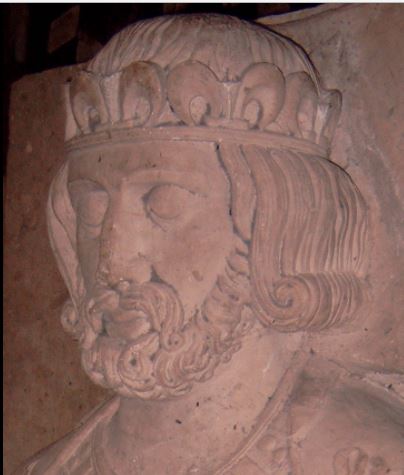 Child of Philip I King of France, Count of Paris and Bertha of Holland

Child of Bertha of Holland and Philip I King of France, Count of Paris

Henry I King of France1 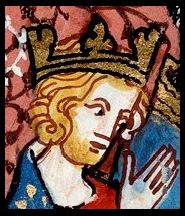 Henry I King of France was born in 1006.1 He was the son of (?) Robert II [King of France] and Constance of Provence. HENRI de France, son of ROBERT II "le Pieux" King of France & his third wife Constance d'Arles [Provence] ([end 1009/May 1010]-Palais de Vitry-aux-Loges, forêt d’Orléans, Loiret 4 Aug 1060, bur église de l'Abbaye royale de Saint-Denis). The Historia Francorum names (in order) "Hugonem qui cognominatus est Magnus, Henricum, Robertum, Odonem" as the four sons of King Robert and Constance[250]. His father installed him as Duke of Burgundy 25 Jan 1016 after completing his conquest of the duchy[251]. He was consecrated associate-king 14 May 1027, at Notre-Dame, Reims, despite the opposition of his mother. He rebelled against his father, together with his brother Robert, 1029-1031, and captured Dreux, Beaune and Avallon[252]. He succeeded his father in 1031 as HENRI I King of France, at which time the duchy of Burgundy was given to his younger brother Robert. In light of his mother’s continuing opposition to his succession, he was obliged to take refuge briefly in Normandy in 1033. He regained control with the help of Robert II Duke of Normandy. A fragmentary chronicle records the death “Vitriaci” in 1059 of “Ainricus”[253]. The Chronicle of Saint-Pierre de Sens records the death in 1060 “apud Vitriacum castrum in Brieria” of “Rex Hainricus” and his burial “in Basilica S. Dionysii”[254]. Merlet reviews all these sources but, based on other documentation, concludes that the king must have died at Dreux[255]. He refers to the charter of King Henri dated 1060 at Dreux (“Drocis castro”), under which the king confirmed the foundation of the priory of Saint-Germain de Brezolles, which records the presence of Agobert Bishop of Chartres and various other members of the chapter of Chartres[256]. Merlet refers to Orderic Vitalis who states that at the end of his life the king was treated by a doctor, also from Chartres “Joanne...Surdus cognominabatur”, but died suddenly from the effects of drinking water against the medical advice[257]. He then highlights the supplementary addition at the end of the charter in question which states that “post mortem patris, Philippus rex cum matre regina” signed the document “Drocis castro in sua aula”[258]. This addition is dated “anno secundo sui regni”, but Merlet attributes the delay to the frequent lapse of time which in medieval times occurred between the action, and finalising the corresponding documentation, a phenomenon which is discussed in detail by Giry[259]. The monastery of Saint-Denis’s Historia Regum Francorum records that King Henri died “civitate Senonis”[260]. The Annales Nivernenses record the death "1060 II Non Aug" of "Henricus rex, Rotberti regis filius"[261]. The necrology of the Eglise Cathédrale de Paris records the death "IV Non Aug" of "Henrici regis Francorum"[262]. The necrology of the abbey of Saint-Denis records the death "II Non Aug" of "Henricus rex"[263]. The necrology of Auxerre cathedral records the death 4 Aug of "Henricus rex Franciæ"[264].

Betrothed (May 1033) to MATHILDE of Germany, daughter of Emperor KONRAD II King of Germany & his wife Gisela of Swabia ([Oosterbecke] 1027[265]-Worms 1034, bur Worms Cathedral). Wipo names "filia imperatoris Chuonradi et Giselæ, Mahthilda" when recording her death and burial at Worms in 1034, specifying that she was betrothed to "Heinrico regi Francorum"[266]. Her marriage was arranged to confirm a peace compact agreed between King Henri and Emperor Konrad at Deville in May 1033[267]. Her absence from the list of deceased relatives in the donation of "Chuonradus…Romanorum imperator augustus" to the church of Worms by charter dated 30 Jan 1034 suggests that Mathilde died after that date, while her absence from the list of the children of Emperor Konrad named in the same charter is explicable on the basis of her youth[268].

** from The World of the Middle Ages (John L. LaMonte) p 194--
Robert II crowned his second Henry in 1026, whereupon Constance and Robert the third son, joined in a revolt against the king in 1030. King Robert died the following year and Henry came to the throne. His brother Robert continued his rebellion supported by Constance and Blois. Normandy, Anjou, and Flanders supported the king, but he was unable to suppress the revolt, and it was only after the death of Constance in 1034 that Robert gave up his claims to the throne in return for the cession of the duchy of Burgundy. The reign of Henry I (1031-60) shows how completely the king was only one of the great counts. His authority south of the Loire was nil, and in the northhe was forced to ally with one great feudatory to counteract another. In 1034 to 1039 Henry allied with Anjou, Nromandy, and Conrad II of Germany against Eudes II of Blois and Robert of Burgundy; to gain the support of Normandy in this war, Henry ceded the Vexin to Robert the Devil and at the end of the war Anjou got Touraine and France received Sens. When Robert of Normandy went on a pilgrimage to Jerusalem he appointed the king as regent for his young and illegitimate son William: the Norman barons promptly revolted and Henry aided William in the battle of Val des Dunes (1047), in which he broke the resistance of the Norman nobles and reduced the duchy to obedience. But the alliance between William and Henry was of but short duration, and in 1054 Henry was supporting a coalition of Anjou, Burgundy, Champagne, Aquitaine, and Auvergne against William. It is eloquent testimony of the strength of William and the weakness of henry, that William managed to defeat this coalition in 1055 and to administer a second defeat on the king three years later. Meanwhile Henry had supported a revolt of Geoffrey of Lorraine against the empire in 1044, but had been unable to prevent the deposition of his protege by the emperor Henry III. His relations with the papacy were strained, partly because he tried to maintain a royal control over the French bishops, and partly because the popes were imperial appointees. When Leo IX summoned the clergy of France to a council at Rheims in 1049, Henry called them all out for military service and prevented their attendance.

In 1051 Henry married Anne of Kiev, daughter of Yaroslav the Wise, quite a fine marriage for the French monarch. Their son Philip was associated with his father on the throne in 1059 at the age of seven, and Henry died the next year, leaving Philip under the regency of Anne and Baldwin of Flanders.

** from Encyclopedia of World History (William Langer, 1962), p 225
France 1031-1060. Henry I, an active, brave, indefatigable ruler, whose reign nevertheless marked the lowest ebb of the Capetian fortunes. The rebellion of his brother Robert, supported by Eudes, Count of Chartres and Troyes, was put down with the aid of the Duke of Normandy, and Robert was pacified by the grant of the Duchy of Burgundy (which continued in his family until 1361). Henry supported the Duke of Normandy (1047), but led a coalition against him two years later,and was defeated. He boycotted the pope and his synod at Reims, and, like his son and successor, opposed the reform movement in the Church. The "prevots" were introduced to administer justice and taxation in the royal lands. The Kingdom of Burgundy passed (1032) to the empire.

** from Wikipedia listing for Henry I of France, as of 11/2/2014
Henry I (4 May 1008 – 4 August 1060) was the King of the Franks from 1031 to his death. The royal demesne of France reached its smallest size during his reign, and for this reason he is often seen as emblematic of the weakness of the early Capetians. This is not entirely agreed upon, however, as other historians regard him as a strong but realistic king, who was forced to conduct a policy mindful of the limitations of the French monarchy.

Reign
A member of the House of Capet, Henry was born in Reims, the son of King Robert II (972–1031) and Constance of Arles (986–1034). He was crowned King of France at the Cathedral in Reims on 14 May 1027, in the Capetian tradition, while his father still lived. He had little influence and power until he became sole ruler on his father's death.

The reign of Henry I, like those of his predecessors, was marked by territorial struggles. Initially, he joined his brother Robert, with the support of their mother, in a revolt against his father (1025). His mother, however, supported Robert as heir to the old king, on whose death Henry was left to deal with his rebel sibling. In 1032, he placated his brother by giving him the duchy of Burgundy which his father had given him in 1016.

In an early strategic move, Henry came to the rescue of his very young nephew-in-law, the newly appointed Duke William of Normandy (who would go on to become William the Conqueror), to suppress a revolt by William's vassals. In 1047, Henry secured the dukedom for William in their decisive victory over the vassals at the Battle of Val-ès-Dunes near Caen.

A few years later, when William married Matilda, the daughter of the count of Flanders, Henry feared William's potential power. In 1054, and again in 1057, Henry went to war to try to conquer Normandy from William, but on both occasions he was defeated. Despite his efforts, Henry I's twenty-nine-year reign saw feudal power in France reach its pinnacle.

Henry had three meetings with Henry III, Holy Roman Emperor—all at Ivois. In early 1043, he met him to discuss the marriage of the emperor with Agnes of Poitou, the daughter of Henry's vassal. In October 1048, the two Henries met again, but the subject of this meeting eludes us. The final meeting took place in May 1056. It concerned disputes over Lorraine. The debate over the duchy became so heated that the king of France challenged his German counterpart to single combat. The emperor, however, was not so much a warrior and he fled in the night; despite this, Henry did not get Lorraine.

King Henry I died on 4 August 1060 in Vitry-en-Brie, France, and was interred in Basilica of St Denis. He was succeeded by his son, Philip I of France, who was 7 at the time of his death; for six years Henry's queen Anne of Kiev ruled as regent.

He was also Duke of Burgundy from 1016 to 1032, when he abdicated the duchy to his brother Robert.

Marriages
Henry I was betrothed to Matilda, the daughter of Conrad II, Holy Roman Emperor, but she died prematurely in 1034. Henry then married Matilda of Frisia, but she died in 1044, following a Caesarean section. Casting further afield in search of a third wife, Henry married Anne of Kiev on 19 May 1051. They had four children:

Child of Henry I King of France and Anne of Kiev

Child of Anne of Kiev and Henry I King of France