Simon Huntington was born circa 1598.1 He married Margaret Barrett, daughter of Christopher Barrett Mayor of Norwich England and Elizabeth Clarke, on 11 May 1623 at St. Andrew's, Norwich, Norfolk.1

Elizabeth Clarke married Christopher Barrett Mayor of Norwich England, son of William Barrett of Westhal and Margaret Petyshall of Norwyche.1 Elizabeth Clarke was born at of Heberstow or Hemmerston in co. Lincoln.1

Child of William Barrett of Westhal and Margaret Love

Child of Margaret Love and William Barrett of Westhal

Child of John Barrett of Blythborough and Johan (?)

Child of Johan (?) and John Barrett of Blythborough

Thomas Birchard was born circa 1595 at bpt. 12 Oct 1595, Fairsted, Essex.1 He was the son of Catherine Finch.1 Thomas Birchard married Mary Robinson, daughter of Rev. Henry Robinson and Elizabeth Orvice, on 23 October 1620 at Fairsted.2 Thomas Birchard died between 9 May 1683 and 16 September 1684 at prob. Edgartown upon Martha's Vineyard.1

Elizabeth Orvice was born circa 1561 at bpt. 23 Biv 1561.1 She was the daughter of John Orvice.1 Elizabeth Orvice married Rev. Henry Robinson, son of Anne Withers, in 1580 at Terling.1

Her married name was Mills. Rebecca Richmond was born in February 1867. She married Frederick Mills, son of Ranslaer Mills and Caroline Clark, on 24 April 1889 at Brantford, Brant, Ontario, Canada.

Child of Lambert of Hesbaye

Chrodbert I Bishop of Tours1,2

Child of Chrodbert I Bishop of Tours

Child of Charibert of Hesbye 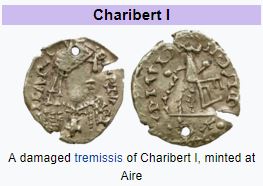 In 556, Chlothar sent his sons Charibert and Gunthram (his youngest) against their stepmother, "Chunna," and younger stepbrother, "Chramn," who were in revolt. During ongoing negotiations, Chramn was hiding out on Black Mountain in the Limousin. When the negotiations failed, the two armies prepared for battle. However, a thunderstorm prevented any engagement, and Chramn (who was hiding out in Black Mountain) sent forged letters to his brothers (Charibert and Gunthram) in which he falsely reported the death of their father (Chlothar). Charibert and Guntram immediately returned to Burgundy to secure their positions.


Partition of Chlothar's kingdom, 561; Charibert's realm in pink
After the actual death of Chlothar in 561, the Frankish kingdom was divided between his sons in a new configuration (map, left). Each son ruled a distinct realm which was not necessarily geographically coherent but could contain two unconnected regions. Their kingdoms were named after the city from which they ruled. . Charibert received Neustria (the region between the Somme and the Loire), Aquitaine, and Novempopulana with Paris as his capital. His other chief cities were Rouen, Tours, Poitiers, Limoges, Bordeaux, Toulouse, Cahors, and Albi. Guntram received Burgundy. Sigebert received Austrasia (including Rheims) with his capital at Metz, and the youngest brother Chilperic received a compact kingdom with Soissons as its capital.[1]

Death and legacy
Though Charibert was eloquent and learned in the law, Gregory of Tours found him one of the most dissolute of the early Merovingians. He maintained four concurrent wives, two of them sisters,[2] and this resulted in his excommunication by Germanus.[3] This was the first ever excommunication of a Merovingian king.[1] As a result, he was buried in disgrace at Blavia castellum, a stronghold in the Tractatus Armoricani. At his death, his brothers divided his realm between them, agreeing at first to hold Paris in common. His surviving queen (out of four), Theudechild, proposed a marriage with Guntram, though a council held at Paris in 557 had outlawed such matches as incestuous. Guntram decided to house her more safely, though unwillingly, in a nunnery at Arles.

Pepin The Elder was born circa 580.1 He married Itta, daughter of St. Arnulf Bishop of Metz - Mayor of the Palace.1 Pepin The Elder died on 27 February 640.1

Child of Pepin The Elder and Itta

Child of Itta and Pepin The Elder