Juliana was born before 17 March 1584/1585 (ch at Wrington [near Bath], England. She was christened on 17 March 1584/85 at Wrington [near Bath], England.2,3 She was the daughter of Alexander Carpenter and Priscilla or Druscilla NN----. She married George Morton on 23 July 1612 at Leyden, Holland.4,5 Juliana Carpenter of Wrington, near Bath, Somersetshire was a member of the Ancient Brethren. Juliana was thirty-eight years old when they landed in Plymouth.

Juliana, the oldest daughter, married George Morton in 1612. George formerly a merchant, had been one of he prominent Scooby Separatists and continued to be an influential figure while in Holland. Although not among the "Mayflower" contingent. he and Juliana and their children sailed for Plymouth on the "Anne" in 1623. Morton undoubtedly would have taken a leading role in the Colony, but the opporutnity escaped him when he died the following year. Their 7 year old son, Nathaniel, was taken into the home of Governor Bradford. In 1647 Nathaniel became Clerk of the Plymouth General Court, a position he held until his death nearly 40 years later. After George Morton died, Juliana remarried. Her second husband, Manasseh Kempton, had come over on the "Anne" at the same time as the Mortons. He was not a particularly active individual in Colony affairs, but he did serve on at least two committes appointed by the Governor. There were no known children by this second marriage.6
She was listed on a passenger list on 10 July 1623 at sailing on the "Anne".7 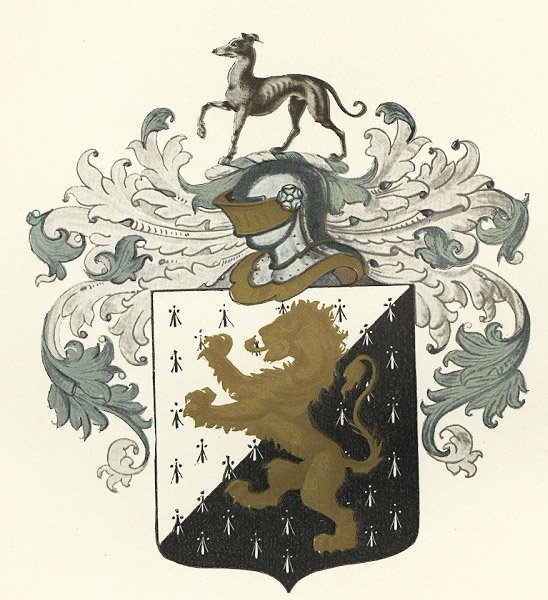 Alexander Carpenter from Wrington,Somersetshire, England, was a Dissenter, and on account of religious persecution removed with his family to Leyden, Holland by 1611. His only son was probably William of Cobham.


A Grayhounds head, erased per fesse Sable and argent

The Coat of Arms, was granted to William Carpenter, as appears by the records of the Heralds College London, 1663, subsequently found on the Tombstone of Daniel Carpenter of Rehoboth, Ma, who was born in 1669.

Children of Alexander Carpenter and Priscilla or Druscilla NN----

F, b. circa 1643
Sarah was born circa 1643 at Plymouth, Plymouth, Massachusetts.1 She was the daughter of John Faunce and Patience Morton.

F, b. 28 March 1694
Priscilla was born on 28 March 1694 at Yarmouth, Barnstable County, Massachusetts.1 She was the daughter of Deacon Joseph Hall and Hannah Miller.

M, b. 6 August 1697
Joseph was born on 6 August 1697 at Yarmouth, Barnstable County, Massachusetts.1 He was the son of Deacon Joseph Hall and Hannah Miller.

M, b. 18 July 1699
Daniel was born on 18 July 1699 at Yarmouth, Barnstable County, Massachusetts.1 He was the son of Deacon Joseph Hall and Hannah Miller.

M, b. 12 August 1701
Jonah was born on 12 August 1701 at Yarmouth, Barnstable County, Massachusetts.1 He was the son of Deacon Joseph Hall and Hannah Miller.

M, b. 6 August 1704
David was born on 6 August 1704 at Yarmouth, Barnstable County, Massachusetts.1 He was the son of Deacon Joseph Hall and Hannah Miller.

M, b. circa 1662
John was born circa 1662 at Yarmouth, Barnstable County, Massachusetts.1 He was the son of Deacon John Hall and Priscilla Bearse.

F, b. November 1668
Daughter was born in November 1668 at Yarmouth, Barnstable County, Massachusetts.1 She was the daughter of Deacon John Hall and Priscilla Bearse.

F, b. April 1672
Hestar was born in April 1672 at Yarmouth, Barnstable County, Massachusetts.1 She was the daughter of Deacon John Hall and Priscilla Bearse.

F, b. 24 May 1676
Martha was born on 24 May 1676 at Yarmouth, Barnstable County, Massachusetts.1 She was the daughter of Deacon John Hall and Priscilla Bearse.

COMMENTS:     Savage and Wyman suggest that this John Hall came from Coventry in England, but there is no evidence for this whatsoever. Banks offers St. Mary Whitechapel, London, as an origin for this man, but cites only "Banks Mss.," so not much weight should be put on this claim either, without further exploration [Topo Dict 102].
John Hall was admitted as an inhabitant of Charlestown in April 1633 [CHTR 91. He appeared in the lists of Charlestown inhabitants dated 9 January 1633/4 and January 1635/6 [CHTR 10, 15]. He signed his name to the town agreement which established the office of selectman, IO February 1634/5 [CHTR 13], and on I May 1637 he was warned about making encroachments on the common CHTR 281.
Both Savage and Pope muddled this John Hall and one or two others. Savage combined the records of this John Hall with those of a second man of the same name at -Charlestown, whereas Pope distributed the records of two John Halts and one Samuel Hall across two entries under the name of John Hall. Jacobus sorted out the confusion in a long note published in 1948 Brainerd Anc 142-431; the critical point is to watch the name Bethia as wife of John.
The gap of six years between the first record of Bethia as wife of John Hall (2 November 1632) and the first record of a baptism for a child (I 3 May 1638) is puzzling. The eldest son, Samuel, was very likely born during this period, say in 1636, but this still leaves a sizable gap; and if John and Bethia Hall were residing in Charlestown throughout this period, why wasn't a baptism for Samuel recorded? One possible solution derives from the problematic nature of the early Charlestown church records, which were recopied some years after the date of the events recorded. Savage demonstrated that the Charlestown church records have RICHARD KETTLE married to his wife ESTHER WARD some time before the marriage actually took place. The same may have happened with John and Bethia. If that is true John and Bethia may not have married until about 1636, and if she were from some place other than Charlestown, perhaps Samuel was baptized there, in a church whose records no longer exist. This proposed solution may also explain the gap of four years between John Hall's admission to Boston church and his admission as a freeman, for he may not yet have been twenty-one in 1630.
On 8 June 1655 concerning a "complaint made by John Hall, of Yarmouth, against Francis Baker, of the same town, for abusing Samuel Hall, his son, and ser[vant to the said Baker, by kicking of him and otherwise unreasonably striking of him, the Court have ordered, that the[ said Samuel Hall shall be and continue with his father until the next Court of elections" [PCR 3:83]; the controversy was ended when on 7 August 1655 the court ordered John Hall to pay Francis Baker ;E8 for the remainder of Samuel Hall's time [PCR 3:88].

BIBLIOGRAPHIC NOTE: Amos Otis treated his family in his survey of Barnstable families, in the course of which he described some of the lands held by John Hall at Barnstable and Yarmouth [Otis 1:450-56].