Emma of Allemannia was born. She was the daughter of Nebi (Huabi) Duke of Alamannia, Count in the Linzgau. She married Gerold I Count of Vinzgau.5 Emma died in 798.5

Child of Emma of Allemannia and Gerold I Count of Vinzgau

Godefried Count of Alamannia married Regine (Ragnetrude) of Bavaria, daughter of Theodo II Duke of Bavaria and Regintrude ( illegitimate dau of Dagobert I). Godefried died circa 709.3,2

Nebi was born.2 He was the son of Nebi-Huoching or Theutbold (?) Duke of Allemania. Nebi died in 788.

He married Elizabeth Hudson.1 Nathan was born on 9 March 1742/43 at Southold, Long Island, Suffolk County, New York.2 He was the son of Nathan Tuthill and Mary Tuthill. Nathan died on 18 January 1803 at age 59.1

Children of (?) Ermengarde and Louis I Frankish Emperor

She married Nathan Tuthill.1 Elizabeth was born on 31 July 1741.1 She was the daughter of Samuel Hudson and Grizzle L'hommedieu. Elizabeth died on 20 April 1831 at age 89.2

Samuel Hudson was the son of Jonathan Hudson and Sarah Wickham. He was a yeoman. He married Grizzle L'hommedieu at Long Island, New York.1 Samuel died on 17 October 1781 at Southold, Long Island, Suffolk County, New York.2


Grizzel was born on the Sabath Day about 11 o'clock at night. 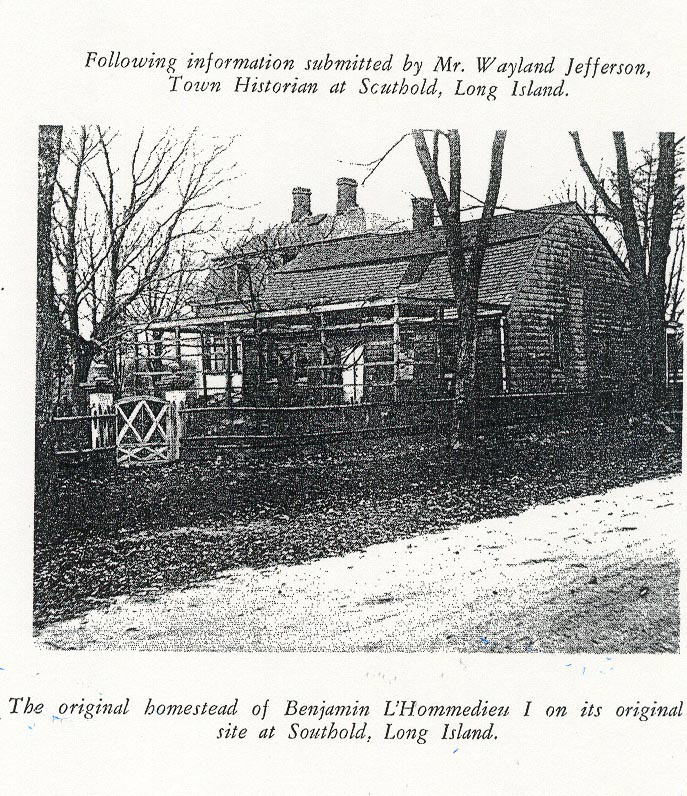 Benjamin was born in 1657 at New Rochelle, France.1,2 He was the son of Pierre L'hommedieu and Martha Peron.


Benjamin and John L'Hommedieu born at Rochell, landed New Port RI the first of February 1690. Benjamin had obtained letters of denization some months before. He settled on the east end of Long Island, in the village of Southold, and married the daughter of Nathanael Silvester, of Shelter Island


Benjamin and a brother left France together (Jean). Their widowed mother went with them to the shore at La Rochelle, and as a parting gift confided to one a Bible, and to he other a silver watch. They fled to Holland, and thence came to America.

A monument in memory of Nathanael Sylvester has been erected on Shelter Island, by the daughters of Professor Horsford, descendants of Benjamin L'Hommedieu and Patience Sylvester, his wife.


Nathaniel was the first proprietor of Shelter Island under a grant from Charles II in 1666. Originally called Manhansack-Ahaqua-Shuwamock, or variations of that, depending upon the source, the island was the land of the Manhansett tribe. The Indian name meant "an island sheltered by island", a perfect description. It lay between Long Island's northern and southern peninsulas, an equal distance from Southold and Easthampton, at the outlet of Peconic Bay. The island was dotted with small bays and coves. The six mile by four mile island belonged to Southold until 1730 when it was incorporated into a separate township. According to Thompson, the island's offices were formerly chosen, taxes assessed, and other matters in relation to the island were transacted at the annual town meetings in Southold; consequently there are no separate records to be found here anterior to 1730.


Nathaniel, along with his brother Constant, Thomas Middleton, and Thomas Rouse; paid 1600 pounds of Muscovado sugar to Stephen Goodyeare. According to Thompson's, "Long Island History", Goodyeare was an extensive and opulent merchant of New Haven. Goodyeare had purchased both Shelter and Robin's Island from James Farrett, an agent of William, the Earl of Stirling, on May 18, 1641. The grantees also procured an agreement with the local Indial chiefs, allowing the English to live in peace on the island.


On May 8, 1656 Thomas Rouse, sold his part of the island to John Booth who transferred it to Nathaniel Sylvester who gave a portion of it to Constant Sylvester, his brother, on September 12, 1662. When the English took jurisdiction over the island, the owners asked Gov. Nicoll for a perpetual exemption from taxes. The governor declared it a town with the same privileges and immunites and requested one lamb per year for taxes, deliverable May 1st of each year.


Sylvester Manor was built at the northern end of the island. The burial ground, probably the oldest on the island, no longe holds the stones of the Sylvesters. Most were moved to the churchyard near the center of the island.
Nathaniel was born circa 1620 at Amsterdam, Holland. He was the son of Giles Sylvester and Mary Arnold. He married Grisell Brinley in 1652 at Shelter Island, New York.1 Nathaniel died on 13 June 1680 at Sylvester Manor, New York.

Ralph died. He married Isabel NN----. Ralph was born circa 1155.1,2 He was the son of Ralph De Sudeley and Emma de Beauchamp.

She married Ralph de Sudeley Lord of Sudeley. She resided, in 1242.

Emma de Beauchamp was the daughter of William I de Beauchamp and Bertha de Braiose. She married Ralph De Sudeley. Emma died. Her body was interred after 1192/1193 at Winchcombe Abbey.

F
She married Robert Wentworth. Emma was born.1 She was the daughter of William Woodhouse.

M
William was born at Wentworth Woodhouse.1 He was the son of William Wentworth and Dionysia De Rotherfield. He married Isabel Pollington.2